This is my first Retro Review Post. The name is probably obvious, but I’ll just say that Retro Reviews are reviews of old books that randomly come to me by word of mouth or pushy book-lenders. This week’s Retro Review is a book that I found in the free pile in my friend’s building’s laundry room.

I don’t read every book that I find in a free pile, but when three of my friends randomly came into possession of the same book, we decided to read it together. Here’s what I thought: 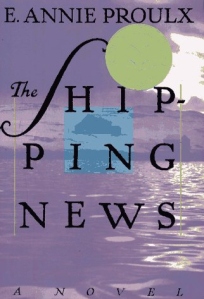 The thing that will strike the reader most about The Shipping News is not the story itself, but the atmosphere of the book. I am desperate to go to Newfoundland now, just desperate.

I would rather go to Newfoundland and eat flipper pie, work for a local newspaper full of typos and drive a boat to work than live in Manhattan and work for the New York Times. That’s how well E. Annie Proulx has convinced me of this world and the way she does it is so ultra clever.

We begin with a man named Quoyle who, in the outside world, is soggy and loathsome. I wasn’t sure I could go through with this novel to begin with because I didn’t know that I wanted to spend that much time with such a pathetic, self-victimizing, paragraph of depression as him. He’s everything that a person hopes that they are not. You don’t want to know too much about him because you don’t want it to rub off on you.

Even worse than the worst stuff happens to him, of course. But, while we, the readers, are not surprised that his life goes badly, we are certainly glad that the bottom comes quickly. Because the bottom comes a rescuer–Quoyle’s Aunt. The Aunt character has to save Quolye from suicide and us from having only Quoyle to relate to.

Then, like magic, all that E. Annie Proulx has to do to completely turn our judgments upside down is move this tragic creature to Newfoundland. Then suddenly, without any real character development at all, Quoyle becomes our only link to reality and, not only does he surprise us, but we are fascinated with his perspective on life.

It would have been simple enough to send a straight-laced, charming character to live on those foggy ocean shores among the fishermen and the crazies, but Quoyle offers the reader an opportunity to grow. He is an opportunity to accept and be accepted.

As soon as he arrives in Killick-Claw, the Aunt immediately sinks back into the culture of Proulx’s Newfoundland and leaves us and Quoyle to fend for ourselves. We cling to him because we are forced to admit that we understand how he feels. We knew all along what he was going through and we are just as terrified as he is that we are stupid, not doing enough and somehow secretly disinterested in doing more. In the face of his new environment, we welcome these familiar annoyances. Newfoundland is a whole new playing field.

We cling to him because, though he may be wretched, Quoyle isn’t nuts. And absolutely everything that happens in Killick-Claw seems completely nuts.

People eat squid burgers, have terrifying parties and pee where one shouldn’t pee. They publish weird stuff in the papers about car crashes that might not have actually happened. They have family curses, terrible sex abuse scandals, extreme poverty and so much more fun, love and excitement than anyone else has ever.

Along with Quoyle, who never ceases to be a push over and an easy target, we fall in love with them. We like them even though they pull things over on us and do terrible things to each other. We want to be just like them in a way. We would do just about anything to hear their stories and learn what makes them tick.

In our indefatigable interest in the people of Killick-Claw, we completely forget about our own inadequacies. Quoyle’s plight in life doesn’t seem so bad now–now that we are being honest with ourselves about how the world really is–odd and a bit creepy–now that we have these characters who aren’t accustomed to ‘acting natural’ or feeling sorry for themselves–characters with a satisfying sense of honesty.

Without trying, the reader accepts Quoyle and all of his awfulness–because, why not?

I think the trick of this book is that his transformation is strangely passive. The passiveness makes the story a bit awkward at times. There are all of these plot points that are interesting in a story-arc kind of way, but many of them are simply dropped. He finds a head in a suitcase, for example and then, nothing much comes of it.

Plus, they say that the main message of the book is that Quoyle learns the difference between obsessive love and desire and comfortable,mutual love and affection. But, I think that the really interesting thing is that Quoyle is put in a position where he has no choice but to trust himself. He can clearly see that his perception is as clear as anyone’s. He learns to accept himself because everyone else does.

Then he falls in love and has a nice life and all that good stuff, but I like to think that the good stuff followed because the only way to love someone else is to learn how to love yourself first.

Have you read it? Tell me what you think!

One thought on “Retro Review: The Shipping News by E. Annie Proulx”